Menu
The Story of Chiara

Chiara Corbella was born on January 9, 1984 in Rome, Italy. Chiara grew up with her older sister of two years, Elisa, in a family that taught her how to live the faith from when she was a child. Chiara went to the prayer meetings of a local Charismatic Renewal movement (Rinnovamento nello Spirito) with her mother, Maria Anselma. This journey, in which she learned how to turn to Jesus as a friend, taught her, above all, how to share the faith with her brothers and sisters in Christ. As she got older, a certain independence emerged in Chiara, making her very determined in her decisions. She had a peaceful demeanor, not rebellious, and had a way of expressing herself in service to others. 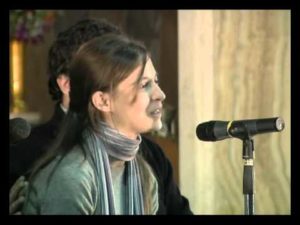 The gift of life

Relationship with Enrico
During the summer of 2002, Chiara was on vacation in Croatia with some friends from high school. Elisa, her sister, was nearby on a pilgrimage in Medjugorje. Chiara decided to meet up with her there. It was here on August 2nd that Chiara met Enrico Petrillo, a young 23-year-old from Rome, as he was on pilgrimage with his prayer group. Chiara was 18 years old and had never dated anyone, but had the intuition that she was standing before her future husband.

After they both returned to Rome, they began dating and getting to know each other. It was, in some sense, an ordinary dating relationship marked by arguments, break-ups and getting back together. During the six years of their dating relationship, the Lord put Chiara’s faith to the test along with the values that she thought she believed in. So much so, she even would later speak of this experience as the part of her life that was most difficult for her to live, even more difficult than the sickness that would eventually cause her to die.

“After four years our relationship began to falter to the point that we broke up,” wrote Chiara. “In those moments of suffering and rebellion against the Lord, because I thought He was not listening to my prayers, I participated in a vocational program at Assisi. I found, through the help of this program, the strength to trust in God and so I tried to see if the relationship with Enrico could continue. We both started spiritual direction in order to be accompanied in this journey. However, our relationship still did not go well until I began to understand that the Lord was not threatening to take anything away from me. He, in reality, wanted to give me everything and only He knew who I was meant to share my life with, but maybe I hadn’t understood anything yet!”

Marriage and their first two children, Maria Grazia Letizia and Davide Giovanni
Once their fears were overcome, Chiara and Enrico got married in Assisi on September 21, 2008. Fr. Vito, a Franciscan friar and the spiritual director of both Chiara and Enrico, celebrated the wedding. After their honeymoon Chiara discovered that she was pregnant. The ultrasound showed, however, a severe malformation in the baby. The baby, named Maria Grazia Letizia, was diagnosed with anencephaly. Chiara and Enrico chose to carry the baby until she was born on June 10, 2009. She died less than a half hour after her birth. Her funeral was lived in the spirit of the same peace that accompanied the months of pregnancy, and it touched many of the people present who received the grace of experiencing a taste of heaven.

A few months later, Chiara got pregnant again. She was pregnant with a little boy that they named Davide Giovanni. Davide was diagnosed, however, with severe malformation to crucial organs and was missing his legs. He too died not long after he was born on June 24, 2010. His funeral was also lived as a celebration.

“In our marriage,” recounts Chiara, “the Lord gave us two special children: Maria Grazia Letizia and Davide Giovanni, but He asked us to accompany them only until their birth. He gave us the opportunity to embrace them, have them baptized, and then entrust them into the hands of the Father, all with a peace and joy that we had never experienced before.”

Francesco and the Dragon
Among the pathologies of the two children there was no connection. To demonstrate it they received the results of the genetic tests, which their family and friends suggested they get done. The other proof that that there was no genetic pathology is that they got pregnant with their third child, Francesco, who was completely healthy. A week after Chiara discovered she was pregnant, Chiara felt something on her tongue. The doctors suspected that it might be a tumor and so Chiara, while still pregnant, underwent the first phase of surgery in order to remove the mass on her tongue. For the second phase, they would have to wait until Francesco was born. The tumor, which Chiara later called the Dragon, was confirmed to be cancerous. She chose to delay the surgery in order to protect the baby that she was carrying in her womb. She even chose to be guided by the doctors that would give her the time needed for Francesco to grow big enough to be born without danger of complications.

“According to most of the doctors,” wrote Chiara, “Francesco was only a 7 month fetus. It seemed that I was the one to be saved, not him. However, I did not have any intentions to put his life at risk because of uncertain statistics that wanted to prove that Francesco was to be born premature in order to operate on me in time.”

Birth into Heaven
The picture of Chiara smiling with a patch on her eye is extraordinary if you consider that it was taken in April of 2012, which was a little more than ten days after she discovered to be a terminal patient. In the weeks that followed, she prepared for her encounter with Christ alongside her husband in a house far from the city and close to the sea. They received the Sacraments daily by Fr. Vito, who accompanied them through this intense time. Chiara and Enrico were strengthened more than ever by the faithfulness of God and a deep joy.

Chiara died at noon on June 13, 2012 after she said her goodbyes to her family and friends, one by one. She told everyone I love you.

Her funeral was celebrated in Rome on June 16, 2012 in the Church of Santa Francesca Romana dell’Ardeatino. Many people came. Cardinal Agostino Vallini, who was present at the celebration, declared, “What God has prepared through Chiara is something that we cannot lose sight of.” Like the funerals of Chiara’s two children, this celebration became a Christian witness to the beginning of a new life in Christ